Security analysis of e-voting in Brazil 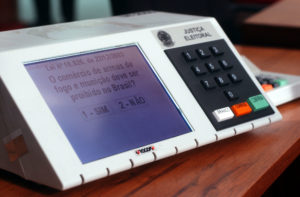 The results were obtained after a 7-year saga to experimentally demonstrate the security problems with the electronic voting system adopted in Brazilian elections, and later informed the (still ongoing) nation-wide debate around the need for adopting paper trails for auditing elections in the country.

Our results were extensively covered by national and international press, for example: New York Times, Ars Technica (and a second time), Der Spiegel, The Economist, ZDNet, BBC Brazil, Globo News, Globo, SBT, Record, Folha, Tecmundo, G1, Terra, Estadão; among others. They were also part of the online course Securing Digital Democracy, by J. Alex Halderman, where the situation in Brazil was briefly discussed.

If you understand Portuguese, the results were discussed at multiple official public hearings in the Brazilian Congress (recorded below):

I also gave many talks in academic and industry events around the country:

You can find other publications and talks below.

The return of software vulnerabilities in the Brazilian voting machine

The Good, the Bad, and the Ugly: Two Decades of E-Voting in Brazil

(In)segurança do voto eletrônico no Brasil

Security of electronic voting in Brazil